The fifth and largest edition of the Himalayan Dash started after a pre-event cocktail at The Lalit, New Delhi and covered more than 3,000 kms over its 11 day run before coming to an end at Srinagar on the 1st of July, 2014. 71 participants in 25 vehicles apart from an Ambulance and a Service Vehicle, moved through Shimla, Manali, Jispa, Sarchu, Leh, Pangong Tso Lake, Hundar, Mulbeg and Srinagar and across high mountain passes including Jalori, Rohtang, Baralacha, Tanglang La, Chang La, Khardung La, Zozi La and Fotu La.

The expedition passed several beautiful lakes including Pangong Tso and Dal Lake as well as deep gorges of the Beas, Chandra, Bhaga, Indus & Zanskar rivers. The participants acquainted themselves with the Buddhist heritage of Ladakh with visits to the Shey, Thiksey, Diskit & Lamayuru monastries. The event witnessed participation by people from various parts of India including Mumbai, Hyderabad, Orissa and Coimbatore.

Tropicool was the associate sponsor of the expedition.

“I want to tell you how much all four of us enjoyed the whole trip – altitude sickness notwithstanding. The whole organisation of the Himalayan Dash was very good. I would love to participate in more such expeditions that you may organise in future and would sincerely appreciate being kept informed about these.” Ranju Gadi, Delhi 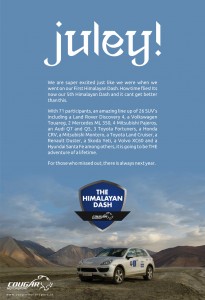