The fourth edition of the Himalayan Dash started after a pre-event cocktail at The Lalit, New Delhi and covered more than 3,000 kms over its 11 day run before coming to an end at Srinagar on the 16th of July, 2013. 29 participants in 12 vehicles apart from an Ambulance and a Service Vehicle, moved through Shimla, Manali, Jispa, Sarchu, Leh, Pangong Tso Lake, Hundar, Mulbeg and Srinagar and across high mountain passes including Jalori, Rohtang, Baralacha, Tanglang La, Chang La, Khardung La, Wari La, Zozi La and Fotu La.

The expedition passed several beautiful lakes including Pangong Tso and Dal Lake as well as deep gorges of the Beas, Chandra, Bhaga, Indus & Zanskar rivers. The participants acquainted themselves with the Buddhist heritage of Ladakh with visits to the Shey, Thiksey, Diskit & Lamayuru monastries.

The event witnessed participation by people from various parts of India including Pune, Satara, Chennai and Conoor. BBC Top Gear and Lonely Planet were the Media Partners of the expedition.

“Hats off to Cougar! The entire concept of the Himalayan Dash is unthinkable and unimaginable! And what a commendable way to see the Himalayas. This entire trip was an eye opener for me!!! I also stayed in a camp for the first time! (I swear by hotels) Would have never ever done it! But kudos to Cougar for making the camps so much fun! Bonfires, music, dance! A complete nature party!!!”

“Cougar would go to any extent to fulfil your request!!” Bhakti Jain, Chennai 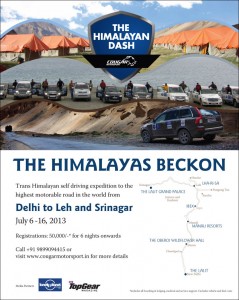