The Himalayan Dash 2012 started after a pre-event cocktail at The Lalit, New Delhi and saw the convoy pass through Shimla, Manali, Jispa, Sarchu, Leh, Hundar, Pangong Tso & Mulbeg and finally SrinagarThe 2012 event comprised of 42 participants including 11 ladies and 15 vehicles apart from an ambulance and service car.

The mélange of vehicles included Porsche Cayenne, Mitsubishi Outlander, 3 Toyota Fortuners, Volvo XC60 and a XC90 as well as 2 Ford Endeavors amongst others.

Heavy snowfall at Khardung La ensured a memorable journey for all those who were experiencing snow for the first time.
A Gala dinner at The Lalit Grand Palace Srinagar, saw the event to its conclusion, on the 17th of July 2012.

Carnation Magneti Marelli-Auto Premio Solutions was the Service Partner and HPCL was the Associate Sponsor.
BBC Top Gear and Lonely Planet Magazine were the Media Partners for the event. 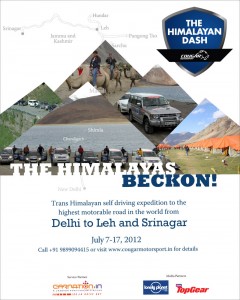